Knysna is situated in a natural paradise in the heart of the Garden Route National Park and surrounded by numerous small nature reserves. It offers steep cliffs and wide beaches, secluded bays and valleys, canyons and mountain ranges, extensive forests, lakes, rivers and estuaries. Discover this stunning and diverse landscape with its rich flora and explore the wide variety of the cape floral kingdom. 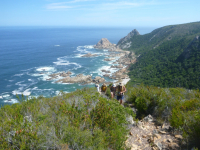 Along the Southern Coast of South Africa lies one of the most beautiful coastlines in the world with magnificent coastal and mountain landscapes. The Garden Route Nationalpark rankes under one of the most popular tourist destinations in South Africa.

The Nationalpark was founded in march 2009 by the merger of well-known Nationalparks, such as the Tsitsikamma Nationalpark, Wilderness Nationalpark, Knysna National lake Area and a number of smaller Nature Reserves and State Owned Lands. The park covers an area of 157.000 ha and is now managed by SANParks South African Nationalparks. 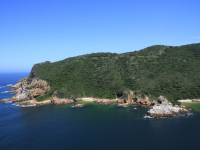 The Featherbed Nature Reserve is situated on the Western Head in Knysna and offers a premier eco-experience on the Garden Rout. It's a privately owned, registered Nature Reserve and South African Heritage Site (No. 59) and is accessible only by ferry. In order to protect the natural beauty, access to the Reserve is controlled and numbers of visitors are limited.There are daily 2 tours offered and reservations are required. 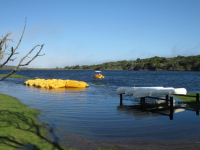 The Goukamma Nature Reserve and Marine Protected Area is situated between Knysna and Sedgefield alsong the coastline on the Garden Route. The nature reserve covers an area of about 2.500 ha with a coastline of 14 km. The Marine protected area extends seawards for 1.8 km. The reserve includes extensive dune fields with some of the highest vegetated dunes in South Africa, wide long beaches, the Goukamma River and estuary and the Groenvlei lake. 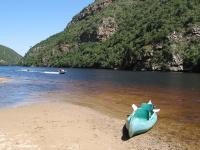 Indigenous Forest and the Keurboom River can be explored by canoe or on foot. 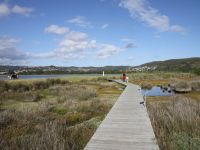 Steenbok Nature Park is located on the northern shore of Leisure Ilse in the Knysna Lagoon. You can stroll on the Interpretive Board Walk along the Knysna lagoon and view the fascinating salt marsh plants or make a Nature Walk through indigenous trees and onto the upper salt marsh or relay on a bench in the shade of the indigenous garden. 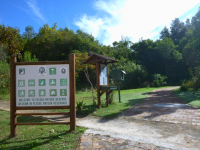 Pledge Nature Reserve was declared on 11.10.1991 as a local nature park, which covers an area of about 10 ha. It's hard to believe, but less than a century ago, this green lung in teh center of Knysna served as dumping ground and brickyard.

The reserve fals within the "Cape Floral Kingdom" with its 8.600 plant species, that is the world's richest temperate flora. At Pledge Nature Reserve they constanly endeavour to increas the selection of locally indigenous species and is an ideal place for people of all ages to view the indigenous flora. 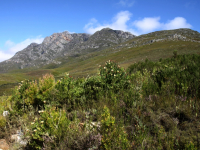 The Outeniqua Nature Reserve lies next to the town of George and has a size of about 38.000 ha over a series of rugged mountain ranges of the Outeniqua Mountains. The reserve also supplies the region with fresh water from its catchments. 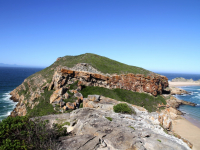 The Robberg Penisula is a nature reserve and national monument situated about 8 km south of Plettenberg Bay on the Garden Route. It's also a Marine Protected Area. Rocks from this region date back 120 million years to the time and break-up of Gondwanaland. In the few caves alson the peninsula there have been found evidennce of middle and later Stone Age inhabitation.

To find our more there is a Visitor Centre at the Parking of Robberg Nature Resverve.