Even in the Stone Age, the Khoi San lived here in this area, such testimonials show in the sandstone caves along the coast. The recent history of Knysna starts at the beginning of the 19th Century is closely associated with the timber industry. The extensive forests around Knysna were an important source of valuable raw material wood and on a historical walk through Knysna you will find many testimonials from this period. 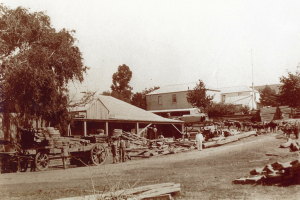 The name Knysna (pronounced ‚Neisna‘) is a Khoikhoi word, but its exact meaning is uncertain. It could mean "place of wood" or "fern leaves" with regard to the huge forest that surround Knysna, due to the Hottentot word "Xthuys Xna „.
Another possible translation would be "straigth down" with regard to the steep sandstone cliffs along the Knysna Heads. The Knysna Heads are one of the most striking geological features along the entire coast of southern Africa. They form a deep and tracherous channel through which the sea floods the wide open lagoon at the mouth of the Knysna River.